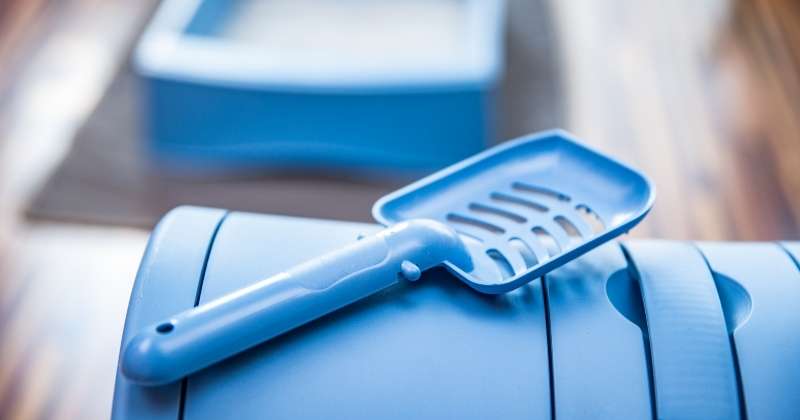 When litter boxes are placed too close together, your cats will view them as though they’re a single territory. To avoid conflict and unwanted behavior, you’ll still need to provide at least one litter territory per cat, plus one extra.

Cats don’t really like sharing, especially when it comes to something as personal as a litter box. When litter boxes are too close together, cats will view them as though they’re a single territory. This means that if one cat uses the litter box, the other may be hesitant to use the same area. Which, of course, means they’ll find somewhere else to go, will hold their urine, or may begin marking — none of which are ideal behaviors.

It’s fine if each litter territory has multiple litter boxes, and that may even be beneficial. You just need to make sure you’re providing enough litter areas throughout your home to keep your cats happy and comfortable.

Why have side by side litter boxes?

While litter boxes placed next to each other are seen as a single territory by cats, there are still potential benefits for doing so — because some cats like to separate urine and feces, to transition to a new litter or litter box, and to maintain cleanliness during emergencies.

To separate urine and feces.

Some cats prefer to urinate and defecate in different areas. The exact reason why isn’t known, but some theorize that it may involve urges to mark territory. Whatever the case, it’s important to allow your cat the freedom to engage in instinctual behaviors.

If you notice that your cat tends to pee in one corner of the litter box and poop in another, they may have this preference. Two side by side litter boxes will allow your cat to separate their business as they see fit.

To transition to a new litter or litter box.

In case of emergency.

Emergency situations may arise where you can’t keep the litter box as clean as you should. Having an extra litter box can help lengthen the time needed between cleanings. It’s not a good long-term solution, and should really only be used temporarily when there are no other options. But sometimes situations do arise where we need to take an unexpected weekend out of town and are unable to find a cat sitter on short notice.

Can I put two litter boxes next to each other?

It’s fine to put two litter boxes next to each other. But keep in mind, your cats will view them as though they’re a single territory, and they may not like to share. You’ll still need additional litter boxes in other rooms and on other floors throughout your home.

How far apart should litter boxes be?

To gain the full benefit of having multiple litter boxes, they should be placed in separate rooms. If you have an open floor plan where this isn’t realistic, consider placing them at least 20 feet apart.

Do I need a litter box on every floor?

Yes. In addition to having one litter box per cat, plus one extra, you should also have at least one litter box on every floor of your home. If there’s a floor that your cats can’t access, it’s not needed.

For senior cats or cats who suffer from arthritis, it’s especially important to offer plenty of litter boxes throughout your home — to make it as easy as possible to access a litter box when needed.

It’s okay to place two litter boxes next to each other, and beneficial to do so in certain situations. Just remember, your cats will view side by side litter boxes as though they’re a single territory. So be sure to provide enough litter territories throughout your home — one per cat, plus one extra.